"Did not finish" is better than "Did not start"

The last week before the race started off badly – I woke up at Sunday with a sore throat and aching body – not too happy considering I hadn’t been sick in a very long time and now it was only one week left to my first Ironman ever.

No more training was done that week, I went desperately to the doctor on Tuesday, but there was little he could do. I just had to see if the virus went away fast enough.  I left Norway with Tim and the boys Thursday and arrived quite late after spending too much time at the airport waiting for a new rental car. Turned out the first car couldn’t fit the bike suitcase.

I was not feeling great at all by the time I went to sleep Thursday night, I was coughing a lot and had chest pains – my mood was not the greatest considering it was only three days left..

First thing in the morning Friday, my mother in law brought me to the pharmacy and I got some drugs that seemed to work quite well. Afterwards it was time to go downtown Frankfurt to check myself into the race and get the bib number and the bags. My friend Espen was also arriving Frankfurt and we went down together to the race office. Seeing all the crowds, the expo and the other triathletes was thrilling and frightening – the day that I had prepared for in so many months was approaching.

After the check in, we bought some stuff at the Expo, before having lunch and hanging around for the race meeting to start. The temperature was constantly increasing, almost reaching 40 C – this was also a major concern for the race day. Looking at the weather forecast, that didn’t make us any calmer – outlook for Sunday was 40C and increasing chance of too high temperature in Langener Waldsee.  The race marshal confirmed our fair immediately in the pre-race meeting – no wetsuit was to be allowed on Sunday due to the high water temperature (above 24.9). A small part of the crowd shared (the good swimmers), whereas most of us were obviously not too happy about this.

We ate a solid pasta dinner in the evening, and was focusing on eating as much carbs and salt as possible, and drinking good. I did a short bike tour Friday evening, just to verify that everything was good with the bike. Then it was time to wrap up the different bags; one for the bike, one for the run and one after race bag – as my nerves kicked in, this wasn’t an easy task.

It was a very hot day on Saturday as well, thus we went to the pool a few hours with the kids. Then Tim dropped me and all my gear off downtown Frankfurt, by a huge line of athletes waiting for  the shuttle bus to Langener Waldsee for bike and run bags check-in.

It took a long time to get there; it was a complete traffic jam by the lake and the bus did hardly move for the last part into the transition area.

I finally got off the bus and went to start the check in - it didn’t start off too well . I was told to fix my aero bars that was cut off and had no solid ends,  and my mood sunk to a all time low.  Luckily, after again waiting a long time in the heat for the service station, I could buy a few plugs to fix my aero bars, puh!

My bike then passed the control points and a friendly girl showed me where to put the bike, the rack for the bike transition bag and the truck who took in all the red bags for the run transition.

It was late evening before I could return to Frankfurt city centre, on a very crowded and hot buss – I started coughing non-stop and could see the other triathletes nervously  trying to avoid standing too close.

I finally reached the race hotel where I checked in for one night, and went off to eat some more carbs for dinner with Espen.  The hotel were full of other triathletes, which I all thought looked very experienced, super fit and calm - I felt nothing like this. My nerves very quite present and I struggled trying to eat enough food, but even worse, I did not manage to sleep – at all.

Finally, after trying to get some sleep for hours, I got up at 03.45, met Espen for breakfast and struggled even more to eat something.  We went for shuttle bus around 04.45 and reached Langener Waldsee at 05.15 – which gave us plenty of time to put some more air into the tires, do the final check of the bike, a few visits at the loo and then we finally set down at the beach.  Although I was quite terrified and nervous for the swim, I really enjoyed the time at the lake – it was a beautiful, warm morning and the atmosphere was great. 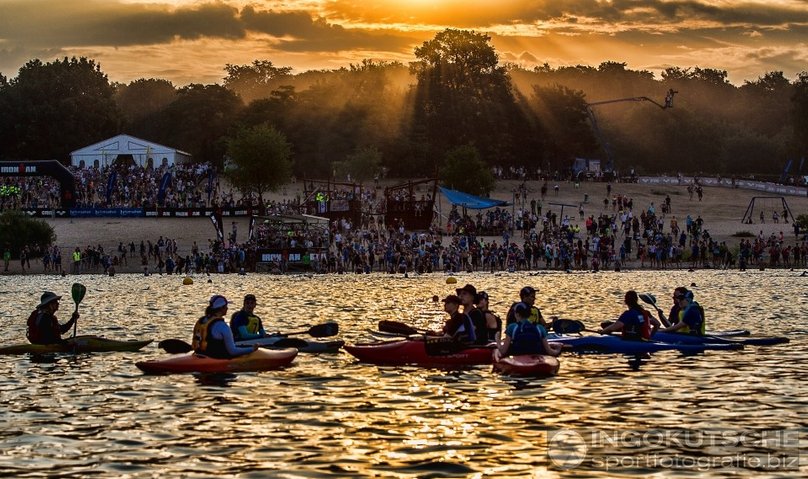 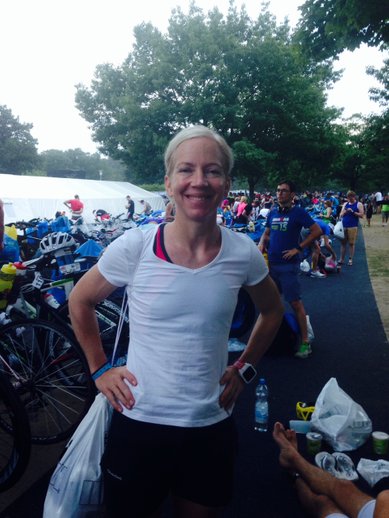 At 6.40 the pro’s went off and a few hundred lucky athletes that could start at 06.50 - then it was finally our turn at 7.00. I still had no clear strategy of where to position myself in the water when the start signal came and found myself placed in the middle of the crowd of 2000 other athletes– big mistake. It was just awful, constantly having to fight for my space and having legs and arms in my face and back for a long time. All the “washing machine” horror stories that I had red  in advance had not exaggerated at all. The lack of wetsuit did also made it more terrifying that I had mentally prepared for. My heart rate was alarming high for the first 1.500 m, and I spent too much time being stressed out. Finally, after the first round of 1500m the field loosened up, and I could start swimming more controlled at a better phase. 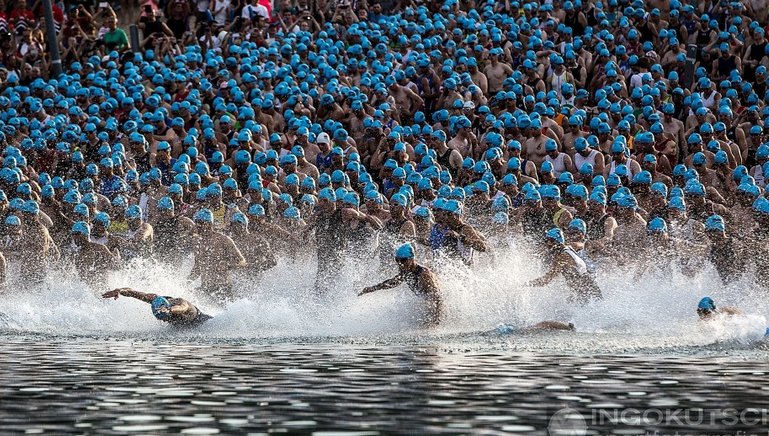 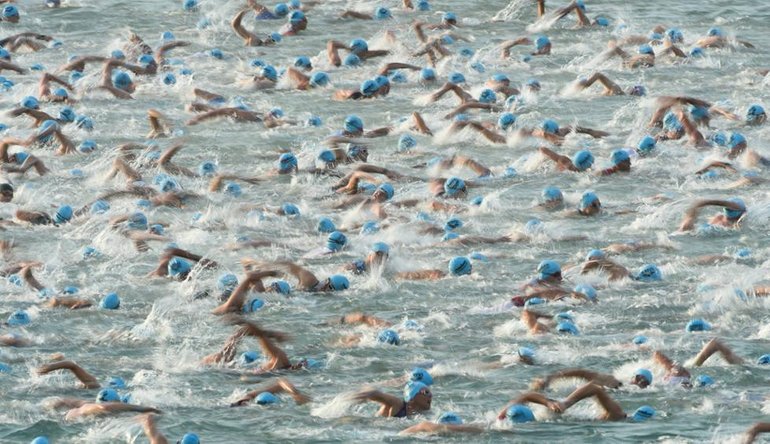 I came up of the water at 1.43; well behind my goal, but I didn’t care - I was just happy having survived  and to  feel solid ground under my feet . I took it fairly easy to through T1, and was happy to start biking 9 min later.

The first round on the bike went ok, it was hot, but I managed to focus on eating and drinking well, and enjoying the crowds along the course.  The ascend at Hühnerberg Hill was fantastic, and I felt like a Tour de France participant as the enormous crowd cheered us to the top.  I was also overtaken by the fastest guy, Jan Frodeno, which was quite fun, with the helicopters and camera crew that followed.

Tim, the boys and the rest of the family had lined up close to the finish of the first round (90K); cheering and waving the Norwegian flags. I started crying when I saw them, I was just soo tired, and I didn’t understand how I was going to manage yet one round, and then a marathon. 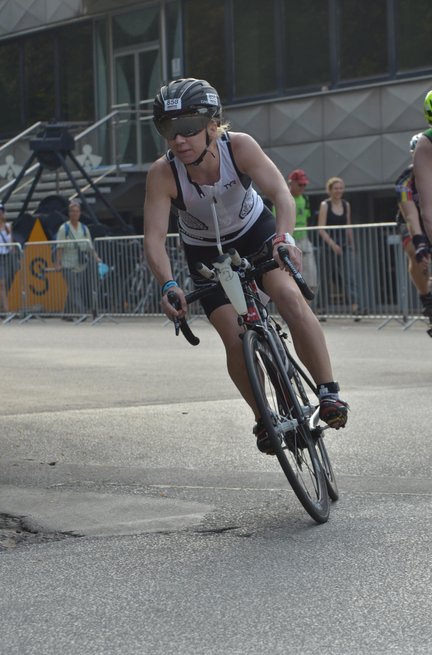 Well into the second round my mood was all time low; it felt like biking inside an oven, and I was worried about the fact that I felt so exhausted this early. Thanks to all the volunteers pouring water bottles over us, and the great crowds along the course (of which many who had brought their garden hoses) – I managed to cool down in between.

I managed to throw in a gel now and then, but that was all I could eat. Normally I hate gels, but now I figured that was the only thing I managed to get down – all the energy bars stored on my bike stayed untouched. I also ensured that I did drink plenty of sports drink and ate salt tablets throughout the day. The day after the race, we learned that one athlete died from only drinking pure water, and not taking in any salts on minerals throughout the day – very sad and shocking news!

I reached the run transition in a bad state,  after spending 7 hrs and 21 minutes on the bike . I started to weep again inside the tent while changing to my running gear, and I felt utterly miserable.  Should I stop now, or what should I do? I asked myself that question many times over the next 5 hours and 21 minutes, but focusing on braking it all up helped a lot. I did a lot of talk to myself throughout the run;  ”complete one round now, then you can walk a bit”. ”Just 5 km more, then you can walk a few hundred meters”. The thought of seeing Tim , the kids and the rest of the family again also kept my feet moving.

The heat made it impossible to have a decent speed, but somehow I managed to get my feet moving. I didn’t really having much pain anywhere, except for some serious stomach problems, which forced me into the most disgusting loos I have ever seen (apparently I was not the only one struggling with my stomach).

The great crowd along the track also kept me going; what a fantastic public - ”come on Bente ” ”you can do it , come on!!!” After completing two rounds, the idea of not finishing became more and more difficult. Also when I started realising I could make it before the cut off,  I forced myself to keep it going.

I managed to only get in one gel on the run part, which was all - when I tried to eat another one, my stomach protested heavily, and I stick to the fluids. Luckily it seemed to be just enough.

The red cross tents started to be quite full at this time, people laying down with intravenous fluid management, totally knocked out by the heat. Afterwards I learned that the local hospitals was quite close to calling it all off due to space problems – luckily that didn’t happen.

For the last 5 K I decided to walk, I knew I could make it within the cut-off, and I was also scared that I would end up passing out like so many others I had seen if I continued. I passed a poor just 600m from the finish line that had passed out, how bitter is that?

I started running again the last 100 m into the finish line; the most fantastic 100m run of my life – what a feeling! The dark had come, the public had formed an alley; cheering loudly, reaching out their hands, waving with glow sticks – and then the speakers voice ” and here comes Bente Hansen from Norway”  . It was absolutely fantastic!! 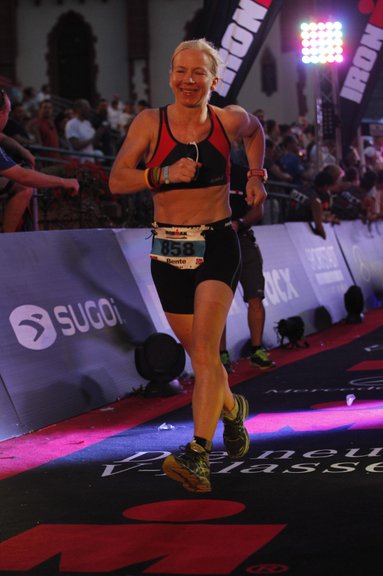 I had made it; 15 min in advance of the 15 hrs cut-off, and well away from my original goal of 12.45, but that didn’t matter – I had not given up, despite a terrible heat of 40C throughout the day, which  implied that the race became a matter of finishing or not – nothing else. 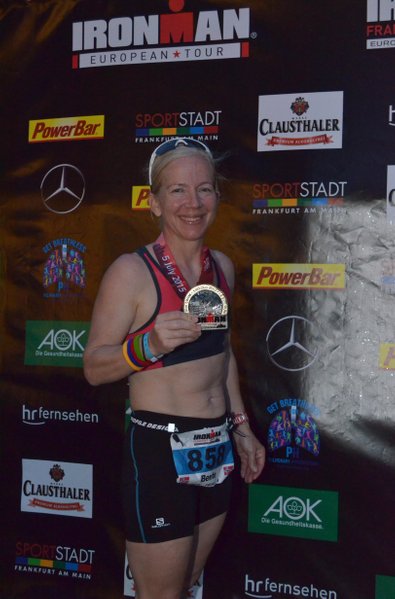 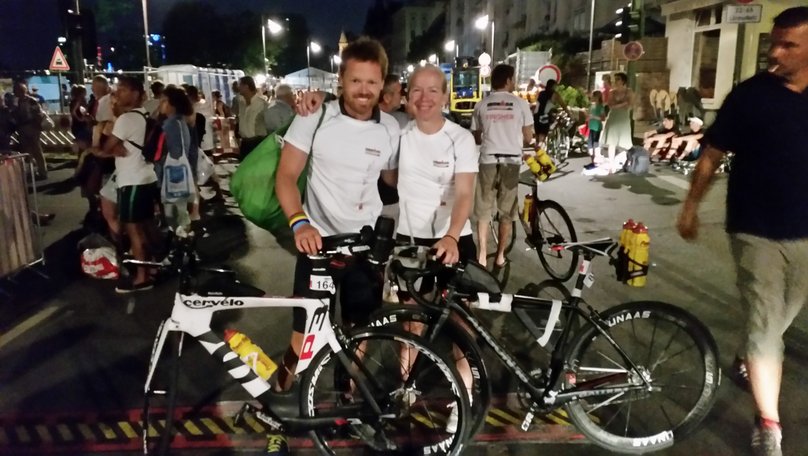 Bente together With friend & co-finisher Espen who finnished in impresssing 13.51 in his Ironman debut