"Did not finish" is better than "Did not start"

The Oslo Triathlon is really nice located at Sognsvann area which is a lake at the north-end of the city that is one of the most important areas for recreation and training for the people of Oslo. Easy to reach for everybody as it is quite near to the city centre and is the final stop of the Metro line. In the summer week-ends many families have barbeques at the lake and swim and splash in the Sognsvann lake or walking around the lake. In the evenings the nearest track around the lake is used for running and walking. As wet-suits have become a more and more usual equipment in average Norwegian households you find an increasing number of people doing open water training in the Sognsvann-lake.

The Swim leg is carried out in the Sognsvann

For Bente and me the Oslo Triathlon is more or less a mandatory event as we do the main part of our training in or around the lake – so it is a home game. Very easy to reach for us as well as the start is not more than 2 km from our home, so we can simply pack a bag with all the equipment and cycle to the Sognsvann. Taking the bike (or public transport) to the event is highly recommended to everybody participating as the traffic- and parking-situation is normally getting really chaotic throughout race-day.

As the event is growing bigger and bigger every year since the Triathlon wave hit Norway a couple of years ago, the course has to be adjusted almost every year. This year Transition Zone has been moved to the innermost part of the hugh car-parking. The advantage with this is that there is more space for Transition area and they could even have a small “Expo”. Disadvantage is that the athletes have to make their way out of T1 and in to T2 among all the cars going in and out the remaining part of the parking lot. The Organizers solved that issue in an outstanding manner by declaring the first and last 300 meters of the bike leg as neutral zone with time being taken in and out the neutral zone. Each competitor got maximal 2 minutes for both coming outward the neutral zone at the start of the bike leg and the same on the way back. The time used in neutral zone was than subtracted from total time. When we first heard about this it seemed a bit confusing but it worked out really well and there  was no chaos in and out Transition area.

All the other details of the course were quite the same as in the last years but the direction of the swim has been changed from counter clockwise to clockwise while the run leg has changed from clockwise to counter clockwise. The Swim leg consists of one round of 1.500 meters. The bike leg is leading you through the villa areas at Korsvold (northern part of Oslo) and out in the beautiful Maridalen (a valley north of the lake Maridalsvann which is the drinking water reservoir for the Oslo people). Even though I have lived in Oslo for almost 20 years, and used the Maridalen for biking and running all these years, I still get excited evert time I am entering it. You come out of the busy city and are from one minute to the next on the country side with small farms, farmlands and animals. All surrounded by some hills with deep forest. You get the impression being some remote place in the Swiss Alps on an altitude of  2.000 meters – but you are only a 10 minutes bike-ride from the busy city centre of Oslo with all the Finance Institutions, Consulting and Shipping business, the Parliament, Public Administration,... 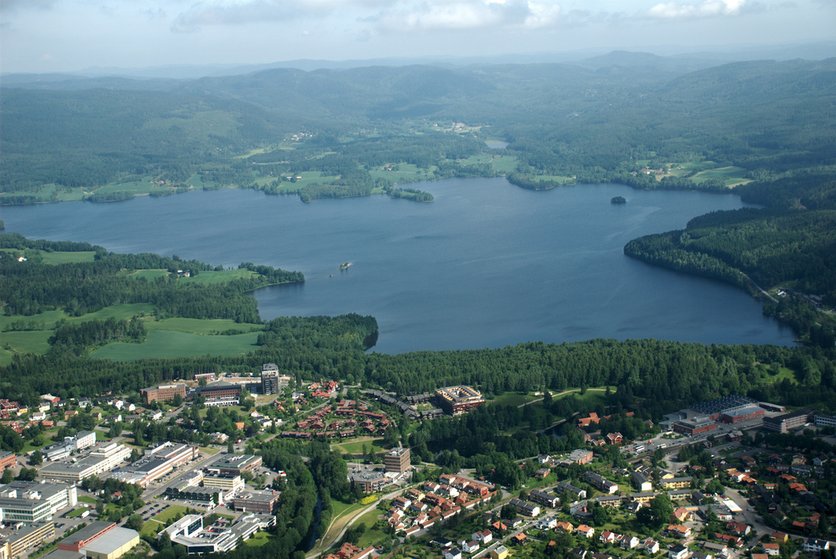 The final run leg takes you 2 rounds á 5 km around Sognsvann. The total number of participants on the Olympic Distance were divided into 5 groups, starting in waves every 5th minutes with the fastest groups first. The groups were put together by self-seeding regarding expected total race time.

As I had indicated my goal of 2.25 I could start in the first group. Still being a rather poor swimmer I placed myself at the end of the around 100 starters in wave one. That turned out to be the perfect strategy for the Swim. I could start really controlled, finding my rythm without having bodies on all sides, under and on top of me. After 200 meters I had found the perfect speed still being able to get enough oxygen by breathing every 3 stroke. Navigation was really easy as I had many swimmers in front of me. Even at the buoy at 750 meters where we had to turn, there was almost no fighting. I got exhausted at the last 300 meters and that told me that speed was set quite right. When exiting the water my Garmin showed 27:50. I got extremely pleased about that. Goal was to come under 30 minutes for the first time in a race – so I was far ahead plan and smiling from ear to ear. For some reason the transponders taking the exact time were placed some 100 meters from the swim exit – so unfortunately we do not get the exact time for the swim leg.

Bente was starting in the 3rd wave and placed herself on the side of the main pack of competitors. She was feeling there was not much power in her body. The exhausting Ironman Frankfurt in July with 40 Degrees Celsius was still not out of her body and training the last 4 weeks was only sporadic. Anyway is was a good swim for her as well without fighting and quite another experience than the live threatening swim at Ironman Frankfurt with mass-start of 2.000 athletes and without wet-suit. She got out of the water at 31:50 on her own clock which is personal best as well for her.

Both of us reached personal best on the Swim leg: A really good start. The conditions could not be better. Perfect water temperature with around 16 degrees Celsius, no wind, no waves and few swimmers in each start-wave.

Conditions were as well nearly perfect for the bike leg. Around 20 degrees Celsius but a little windy in the Maridalen. I used the neutral zone to squeeze in a 3 portion energy-gel and started really aggressive on the bike. The first round was very nice as there was not so much traffic on the road. When I started the second round at Brekke my watch showed an average speed of 37 km/h – very satisfying and inspiring for the second round. In the second round it got much more crowdy on the road. Many competitors from the later start waves entered the Maridalen for their first round. Together with other cyclists, cars and people training on there rollerskies it got quite chaotic and partly even dangerous. Anyway I kept pushing on the bike with an average heart rate of 158 which I consider as the maximum I can hold on the bike for an hour.

Back in the transition zone, I realized that I simply had forgotten to check how to find my place after the bike leg – lesson learned for next time. It felt like ages when checking 3 rows unsuccessful to find my place but I do not think I lost more than 30 seconds on that. The bike leg went as well faster than I could hope (1:06).

Bente pushed as well very hard on the bike ending up with 1:16 which gives an average speed of 31 km/h. She was especially pleased to experience being able to stay in the aero position for almost the entire 40 km and passing many male competitors.

The nice thing about Triathlon competitions is that there is always at least one aspect of your race you can be happy with. On the opposite side there is normally always at least one aspect that did not went out as planned. I was really satisfied with both swim and bike, Bente was very happy with her bike leg and the transition together with an ok swim. On the run we both felt immediately that legs were stiff and far too much energy had left our bodies riding our bikes to new PB. The first 3 km were very hard and we were both thinking of stopping to run and walk some steps. But we kept running and it got a bit better in round 2. We finished the run leg a couple of minutes behind expectations but both of us being satisfied as we kept running all the way and biting teeth together when it became a bit painful. We crossed the finnish line after a 0:44 (Tim) / 0:51 (Bente) run and were very pleased with the results and both of setting PB in our home game.

In total we ended up on 2:46 (Bente) respectively 2:23 (Tim) and reached 9th of 28 (Bente) respectively 27th  out of 134 (Tim) in our age-groups. As we had Oscar looking after the boys we had an extra hour of “sparetime” which we spend hanging around at the finish line, talking to people cheering up the other competitors and enjoying the first and so far only really summer day that year in Oslo and breathing the warm and friendly atmosphere of the Oslo Triathlon.

Oslo Triathlon is a really nice event. There are so many different people participating -  all from people with impressing results down to 2:00 hours to people using double of that time. In the transition zone you find old trekking bikes side by side to state of the art TT-bikes. And everybody feels welcomed in the same way. The around 120 volunteers that make this event possible did a fantastic job. The same counts for the numerous police officers securing that traffic went as smooth as possible.

If there is one thing that can be improved in the future it must be that roads are not closed for normal traffic. I do really not understand why it should be impossible simply closing the few roads that are effected that day for normal traffic. It is not necessary that everybody must have the possibility to go by car to the Maridalen on that Saturday – there are endless other nice place for recreation activities near Oslo. The same counts for other cyclists and these guys on their rollerskies using a whole lane of road. I expect it just being a question of time when we will experience the first serious accident on the Oslo Triathlon when a competitor hits a car in a front to front collision. As far as I know this is a decision to make from the politicians in the Oslo City council. It is possible to close central parts of Frankfurt and London and Berlin when those kind of arrangements take place, so why should it not be possible to close the Maridalen in Oslo for half a day once a year. Of course there will always be some people complaining but they are doing so in Frankfurt, London and Berlin as well. 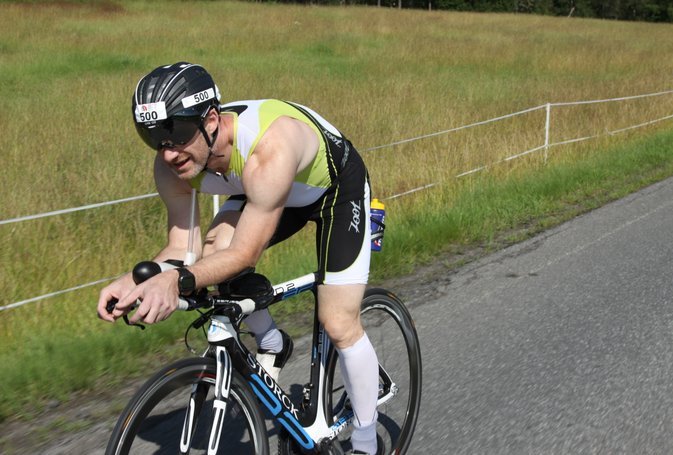 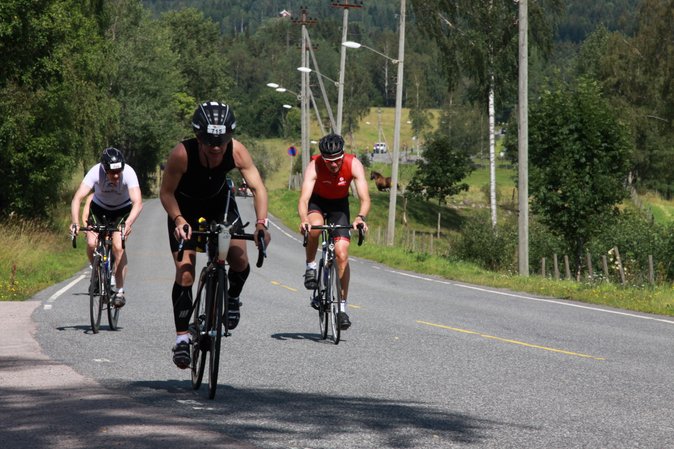 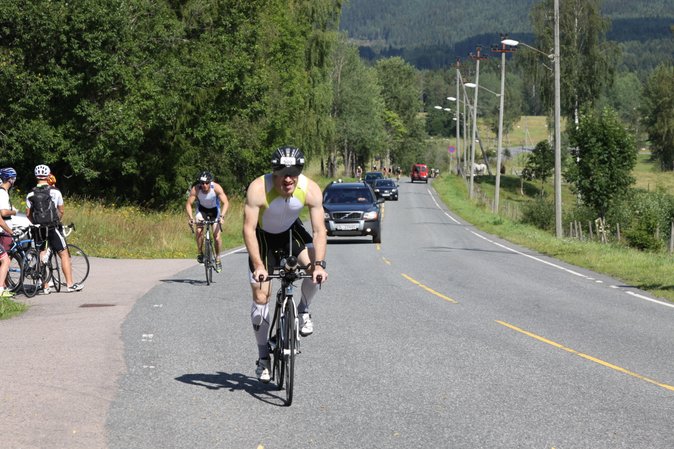